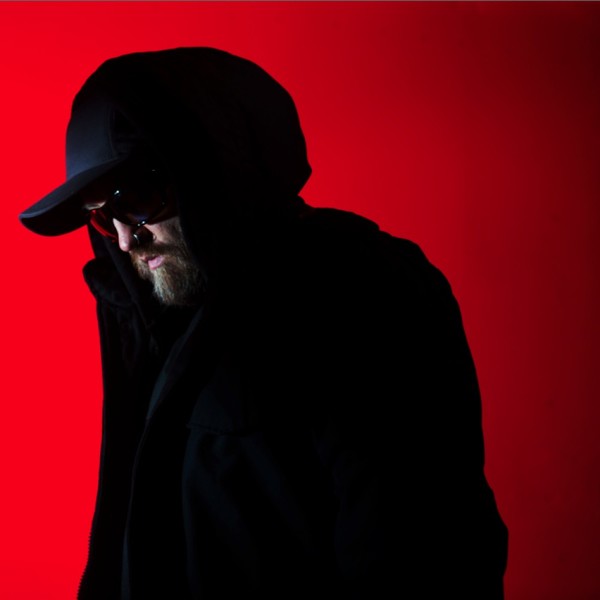 The Bug: Main mutation of producer Kevin Martin who over the years has been, and is also currently, known as...

The Bug first came to be in 1997, when Kevin collaborated with DJ Vadim on Tapping The Conversation. Released on N.Y’s Word Sound label, it was conceived as an alternate soundtrack to Coppola’s 'The Conversation’. No thought was given at the time that a collaboration with DJ Vadim would be a precursor to working with Ninja Tune 10 years later.

From 2001-2004 The Bug teamed up with UK dub veteran The Rootsman for a series of singles under the name Razor X Productions. The early productions of which would frame the template for the first proper Bug full length, 2003’s Pressure. The Razor X material was some of Kevin’s first foray’s into what would become a signature head-sheering apocalyptic dancehall production style. This was continued on Pressure but also with an ear to balancing out the sound with headier dubs. Classic dancehall M.C Daddy Freddy was brought in, New Flesh’s Toastie Taylor, along with The Rootsman, Roger Robinson, Paul St. Hilaire (aka. Tikiman), Wayne Lonesome, and more…

Towards the end of this period some crucial connections would come about that would shape The Bug’s work in the later half of this decade, one of which was being interviewed for XLR8R Magazine by Steve Goodman, aka. Kode 9. Finding they had a lot of similar music taste and interests Steve recommended a new crop of producers in London that he was hanging out with that were revolving around the Fwd Club at Plastic People. Discovering that these people shared the same hunger for bass, space, and unaligned sonic trajectories, The Bug felt right at home alongside Loefah, Digital Mystikz, Skream, etc… Over time this group of people would shape what would be commonly known as Dub-Step. Through his work with Wayne Lonesome, Kevin was turned on to the work of Warrior Queen. Instantly blown away by her delivery he made contact and the ensuing releases Aktion Pak (Rephlex) and Money Honey (under the moniker Pressure which was released on Kode 9’s Hyperdub label) further shaped the musical direction of The Bug. The final piece of the new incarnation of The Bug came about when Kevin was booked for a Mary Anne Hobbs session of BBC Radio 1’s Breezeblock. Two of the main vocalists requested were Roll Deep’s Flowdan, and Ricky Ranking (best known for his work as vocal foil/inspiration to Roots Manuva).

"It's angry and ferocious, but always triumphant: When it threatens to bust out your windows and rip holes in your speakers, it crackles with the kind of force that makes you want to punch the air as hard as your subwoofers do" (Pitchfork : London Zoo 8.6)

All these connections became the starting point for London Zoo, his critically acclaimed debut release for Ninja Tune which dropped in 2008. Utilizing the aforementioned vocalists, along with UK reggae legend Tippa Irie, it was a record grown out of the heart of London sound-system culture and multi-cultural meltdown. A record that although was referenced to the early dub-step scene, also busted outside of any of those narrow definitions and stood on its own as a celebration of the capital’s urban cultural clash, uniquely detonating dancehall, grime, hip-hop, and noise onslaughts. A record campaign that culminated in a personal invite from Trent Reznor to blow up stages in some of the most unlikely reaches of America on the Nine Inch Nails Lights In The Sky tour.

Post London Zoo, The Bug alternated between live shows, and concentrating on this apocalyptic lovers rock project King Midas Sound. 2012 saw a re-emergence 7" style with his Acid Ragga imprint series. With a Roland TB-303 in hand he found the missing link between classic acid techno and digital dancehall. It was no second coming of acid/summer of love celebration. It was raw digi-grinds with the likes of Daddy Freddy, Warrior Queen, Copeland, and Miss Red up on them.

2013's Filthy EP marked the first rumblings of a new full length record. And now Angels & Devils is upon us (are amongst us). For this album Kevin Martin has both enlisted the familiar and smashed open the idea of what The Bug is. Grouping the results in two different distinct themes of Angels & Devils under the same conceptual banner. Both a year zero of sorts for The Bug, yet drawing on what has been before. Indeed The Bug is the only producer who can bring in the likes of Grouper, Copeland, Miss Red, Gonjasufi, Flowdan, Justin Broadrick (Godflesh/Jesu), Mala, Death Grips, and Warrior Queen and make it seamless. End times need a soundtrack to prep for what's above and below, and this is it.

Watch for post release campaign addendums. The Exit EP (featuring "Void" plus further Grouper material, Manga's wide cut "Function" and Daddy Freddy's "Blaow" with attendent instrumental dubs), and Bug vs. Earth (Dylan Carlson), a 12" release of tracks initially penned for Angels & Devils, but which quality of results quickly dictated was in need of its own release. Plus additional Acid Ragga onslaughts being detonated in quick succession before the Acid Ragga compilation.