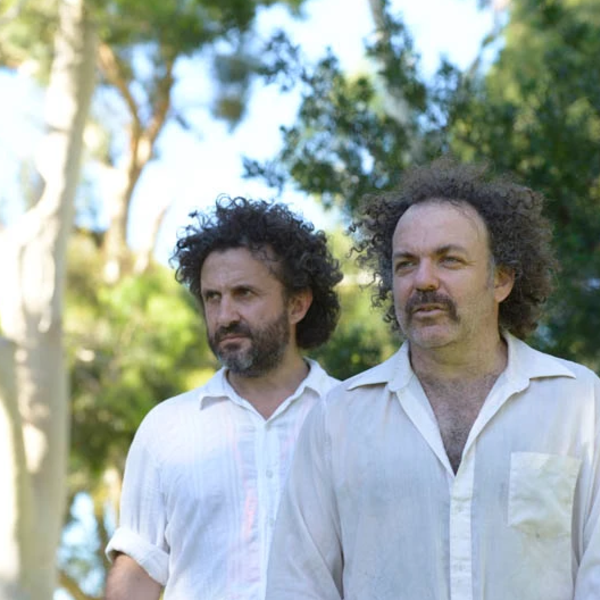 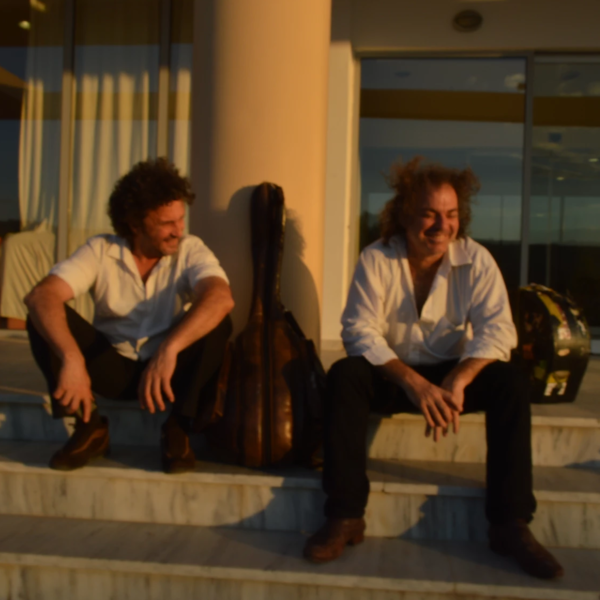 Xylouris White is firmly rooted in the past and future. Playing Cretan music of original and traditional composition, the band consists of Georgios Xylouris on Cretan laouto and vocals and Jim White on drum kit. Xylouris is known and loved by Cretans and Greeks at home and abroad and has been playing professionally from age 12. Jim White is an Australian drummer known and loved throughout the world as the drummer of Dirty Three, Venom P Stinger and now Xylouris White. For the last four years these two men have been performing as Xylouris White, the culmination of 25 years of friendship forged through music and place.

If the talents of singer and lute player George Xylouris seem otherworldly, even god-given, it is hardly surprising. One of the best-loved artists on Crete, the largest and most populous of the Greek islands, Xylouris is a member of a clan long-regarded throughout Greece as musical royalty. A clan that hails from Anogeia, a mountain shepherding village down the hill from the Cave of Zeus, that hotspot of ancient mythology.

To hear Xylouris play his long-necked lauto and sing songs of love and liberty in his impassioned, distinctive voice, is to experience tradition at its finest; tradition that this bearded father-of-three grants respect, and crafts into something unique. It’s a sound that has taken him around the world, to festivals and concert venues throughout Europe, North America and Australia – where he lived for eight years in Melbourne, absorbing influences from the city’s thriving live rock scene – and back again to Crete. Teaching and playing at home, in village communities, is his lifeblood – just as it is his family’s.

Xylouris could not have been anything else but a musician: his father is the Cretan singer and lyra player Psarantonis, a man beloved of everyone from ethnomusicologists to Nick Cave. His late uncle was the iconic Nikos Xylouris, a singer and lyra player who became a symbol of the protest movement that brought down the Greek military junta in 1973. George was just a kid when he started playing the lute at the knee of his uncle Giannis Xylouris; after accompanying his famous father at village functions, there were several group recordings. Then George Xylouris struck out on his own.

Until then the Cretan lute was usually played as a backing instrument. But with albums such as Antipodes, by Xylouris Ensemble , Embolo with his uncle Psarogiannis and Oso ki an Dernei o Anemos out with All Together Now , Xylouris showcased the lauto’s solo potential with a repertoire of traditional and self-penned material.

His numerous projects are testament to his restless musical curiousity: there’s a duo, Xylouris White, with Jim White, Brooklyn-based drummer of Australian instrumental trio, Dirty Three, with who Xylouris has toured. The Xylouris Ensemble features his three Greek-Australian children.

His concerts at home have become legendary for their musicality and power; his onstage record is currently 18 hours straight.

There are drummers and there are drummers. And then there is Jim White. Having first commanded international attention in the mid-1990s with the acclaimed Australian instrumental trio Dirty Three, the New York-based virtuoso is now the go-to guy for alt-A-list vocalists with collaboration in mind. Those who’ve worked with him – and all those he’s mesmerised as he plays - testify to his deft way with a rhythm, a downbeat, a jazz-fuelled wig out.

His is a unique playing style forged in the then isolated Melbourne; a style that can sound like a full band one moment, and something stark and beautiful the next.

PJ Harvey has said there is ballet in White’s light, precise touch;. Will Oldham once remarked on White’s ability to dismantle a song, bit by bit, and rebuild it with his parts incorporated. The likes of Smog, Nick Cave, White Magic, Bonnie Prince Billy and Cat Power all know that there’s more to White’s drumming than mere accompaniment. His intuitive beats and singular approach have complimented the repertoire of the iconic Cretan lyra player, Psarantonis, and created sparks in his collaborations with the Cretan lute player George Xylouris. Whoever White is playing with, he is right there, present in the most inspirational sense.

With a career this long and varied, credits are too numerous to list. There have been projects with filmmakers, collaborations with visual artists; and an album of duets with the singer Nina Nastasia. A founding member of the now-defunct Australian avante-rock outfit Venom P-Stinger, White has curated the leftfield UK music festival All Tomorrow’s Parties. In his spare moments, he’s drumming. White never rests on his laurels.

Their visceral interplay and spirit is a highly rare, magical and mysterious one, and with ‘Mother’, their third consecutive collaboration with Fugazi's Guy Picciotto, they've dispatched another compelling set of clues.
Vish Khanna - Exclaim
Both Born to the Form, a Couple of Continents and Major Traditions Apart
Xylouris White, the duo of Jim White  and George Xylouris

When the lute player George Xylouris was a teenager — growing up in a mountain village on Crete, not far from the Ideon Cave, where Zeus worshipers have been making pilgrimages since the end of Minoan civilization — he was working as accompanist to his father, the folkloric singer and lyrist Antonis Xylouris. When the Australian drummer Jim White was a teenager, he was playing in a Melbourne noise band called the People With Chairs Up Their Noses.

It’s good that they’ve ended up together. Both are extraordinary musicians. From a distance, in market terms, one is a traditional artist and the other a nontraditional one. (Mr. Xylouris has mostly stayed within the music of his culture and family; since the early 1990s, Mr. White has been the drummer for the great instrumental trio Dirty Three.) But up close, during a set at Union Pool in Williamsburg, Brooklyn, on Thursday night, the difference was negligible. Onstage, as Xylouris White, they look and play like brothers.

...Xylouris White…are master musicians bonded by enduring friendship. ...(this was)... my third, live exposure to the duo in five months after dazzling gigs in Iceland and Brooklyn ... the dancing broke out right away as Xylouris and White locked into a rolling, modal thunder that I have already compared to the Middle Eastern psychedelia of the American late-Sixties band Kaleidoscope but which also evokes the empathy and elevation of saxophonist John Coltrane’s iconic 1967 duets with drummer Rashied Ali, released in 1974 as Interstellar Space.
David Fricke - Rolling Stone